The Mount Oswald development received outline planning permission a while ago. A full application has already gone in for the first phase, at the southern end of the site. It appears connections will be provided for cyclists and pedestrians to the A167 (car access is from South Road). The greater concern is whether an opportunity is being missed to create a new off-road route parallel to South Road.

The picture is taken from the Design and Access Statement of the planning application for the first phase. The big unknown is the middle area, where the large self-build houses will be. No plot divisions are shown on the plan. Will there be public access north-south through this area?

South Road is not shown as a strategic cycle route in the County Durham Plan. The Mill Hill Lane route and the A167 are accorded the status of primary routes, but there is not even a secondary route along the South Road axis, despite it being the obvious route to the University from the south and from all the new housing on Mount Oswald. 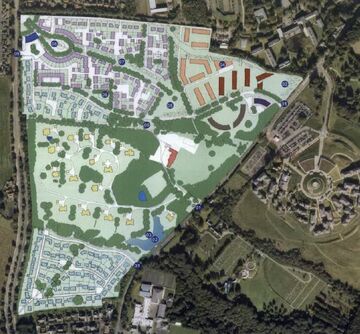