Coming out of Durham down Shincliffe Peth on the A167, there is a pedestrian refuge at the foot of the hill, by the turning to the cycle-track which skirts the bottom of Maiden Castle hill-fort. You are expected to negotiate a 180 degree turn to access this track, at the same time as avoiding speeding cars and the pinch-point of a refuge. In the other direction, cyclists have to be cautious of using the refuge as the width of it is not sufficient to accommodate a tandem or a cycle with trailer or child tag-along attachment. Visibility is poor when crossing the road from north to south.

Improvements might include moving the 30mph limit to the foot of the hill, introducing speed cushions or a raised junction table. If the speed were reduced, the central refuge would not be needed and some of the difficulties might be avoided, but that may not be the best solution at this site.

Speed of the traffic is the main issue here, both for cyclists and the pedestrians who use the popular footpaths. 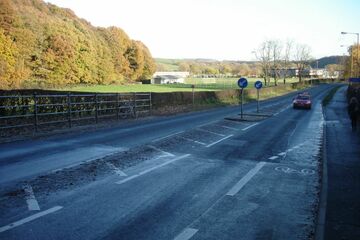