The route on the east side of the A167 past Crossgate Moor and Framwellgate Moor crosses a number of roundabouts. The cycle-path leads you across the roads very close to the roundabout, via the central refuge in the middle of the road. Some of these roads have two lane entry to the roundabout. Crossing both lanes at once is tricky as you have to have an eye on whether the traffic is about to move out onto the roundabout. If you have a longer vehicle, such as a bus, waiting, then the route to the refuge is blocked. There are no road markings to warn motorists that cyclists might be expected.

The route is probably going to be improved as part of the Great North Cycleway. If these roundabouts are to be made safe enough for children to use, major alterations will be required. (The route goes past Durham Johnston School so should be available to children.) The route should cross further from the mouth of the roundabout, preferably on a different-coloured surface, maybe raised. 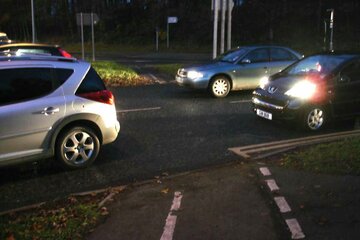