The site for the new building between in the triangle between the cycle path the busway, and non-busway road has a solid hoarding around it. To help visibility, the solid hoardings have been removed for 3 panels on the cycle path side, and only 2 on the road side, so traffic has greater visibility of cyclists that cyclists have of motor vehicles - so vehicles assume there is nothing coming and slow down less than they should.

To increase visibility on the corner, the third solid panel should be replaced with the mesh fencing, as has already been done for the first two on the other side. 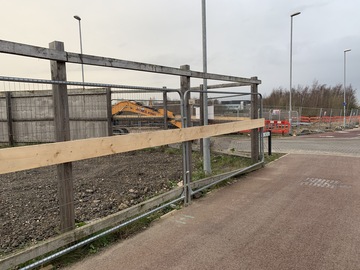