Bramshot Lane was a MoD Road which went from Summit Avenue to the entrance of the National Gas Turbine Establishment at Pyestock. The Pyestock site and road have been sold to developers and the site renamed Hartland Park.
The developers have now erected fencing on both sides of the road which comes up to the locked gates used by the MoD to access their land.
Previously there was a gap at the side of the MoD gates to allow access for cyclists and pedestrians.
For cyclists the main issue is the SUP crossing at the northern end which provides a valuable link between Farnborough and Fleet.
The last remaining alternative is a staggered crossing on the A327 near the bridge over the railway and Fleet Road. This has poor sightlines and is unsafe.
About 200m to south access to the Military Lands has been blocked on both sided of the road. It was previously possible to walk or cycle between the two sections of the Lands divided by Bramshot Lane.
Note that paragraph 2 of the Aldershot and District Military Lands Byelaws 1976 allows public assess to the Military Lands when not being used for military purposes. 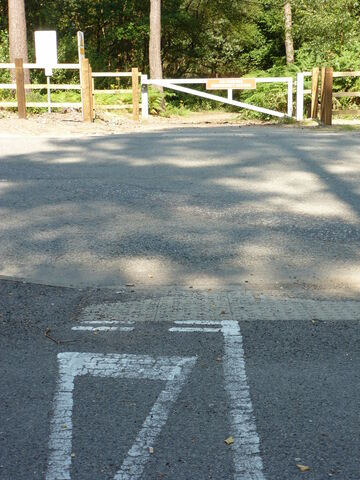